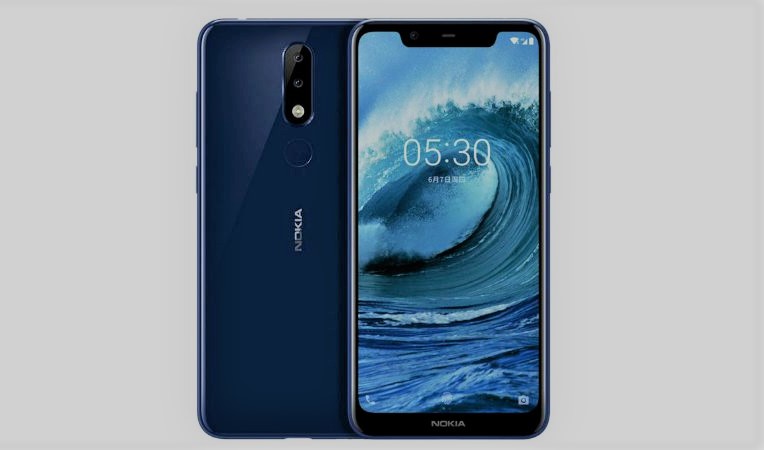 Nokia X5 is an upcoming smartphone to launch firstly in China on July 18, Nokia also named it as Nokia 5.1 plus. The phone is set to come with a new exciting feature with the notch in-display. At HMD Global, the launch event is cancelled due to some issue with the venue that was to be launched on July 11. Alongside, Nokia X5 will come up with some great feature to beat up from their competitors.

At Chinese Telecom Authority, TENAA revealed the specifications and detail design on Nokia X5. As per listing, it will have cool 5.86-inch Display (1080 x 2244) pixels of Resolution with 18:7:9 aspect ratio. Nokia X5 also has a notch-in Display suited with crisp HD+ Display. Nokia has doesn’t feature the Gorilla Glass protection but will provide a great durability of the screen. Getting to its Design it has the cutting-edge display with both side glass covering body that will give a good glossy look with a very suited to its new three colour options Copper, Tempered Blue and Black. The bezels are thinner at its side but little thicker at its bottom which can be reduced to give a killer look.

Nokia X5 powered by Android 8.1 (Oreo) and may has a chipset of MediaTek Helio P60 processor with a 2.0 GHz clock speed. The phone will come with three storage variants includes 64 GB, 4/6 GB RAM or 32 GB, 3 GB RAM that will fit a good combination while you are doing a heavy task and playing games. Also, there will be a dedicated micro-sd card slot for insertion.

The Nokia X5 has a 13MP(PDAF)+5MP of the camera with an in-depth sensor paired with dual LED flashlight. The phone will able to capture such brilliant and bright photos with a saturation that will work perfectly fine even in dark condition. For selfies and video calling, it has a front camera of 8MP of the camera with some new cool features to enhance the picture.

The Nokia X5 packs a non-removable Li-ion 3000mAh battery that will stay last long for 8hrs on screen time. Getting over to its some features it supports various bands of 4g (Volte support) network, inbuilt fingerprint sensor, micro USB 2.0. Nokia X5 has various connectivity options including Wi-Fi 802.11 a/b/g/n, GPS, Bluetooth 4.2 and NFC. Also, it has various sensors like accelerometer, gyro, proximity and compass

According to Indianexpress.com the price of Nokia X5 will be priced at Yuan 799 (approx Rs 8,200) for the 32GB storage model that will be seen in India. While at Yuan 999 (approx Rs 10,300) is set for the variant of 65GB of storage. The phones will be launched in China, the further details have not be shared by HMD global.

4 thoughts on “Nokia X5 set to launch on July 18: Its feature, specifications, and its price”