How to play PUBG mobile on PC How to play PUBG mobile on PC: An Overview

PUBG is a new and attractive android game, which almost most of the people are loving it. Before PUBG mobile and before getting popular, there’s been a less popularity gained by Tencent because people used to play PUBG on PC and the game requires a huge specification that most of the people can’t afford it. So, after been increasing the popularity by Youtube and Facebook in which the gamers used to play live, And that Tencent has seen the craze and finally launched PUBG mobile.

But, Unluckily there are still many devices that aren’t supported to play smoothly. But still, PUBG lovers use many tools like GFX tool available on play store to experience a good gaming.

Also, there are many players who aren’t satisfied with their graphics of PUBG mobile. So, players start moving to PC that they can experience PUBG mobile on a bigger screen. but so even, people may face many problems in running the game on PC. So, I have written a complete guide in which you will be getting “How to play PUBG mobile on PC”

How to play PUBG mobile on PC: Ways

You may have been wondering, how to play PUBG mobile on PC. There are many ways or say some effective ways by which we can run the game on PC.

Tencent gaming buddy is an official gaming emulator especially made for PUBG mobile because Tencent knows their player’s craze. The Tencent Gaming Buddy is designed to optimize PUBG mobile on your PC using AOW engine. The emulator is designed such a way that it automatically detects your PC’s keyboard and mouse. The emulator also has an options to change your graphics settings to make the best compatible to run the game smoothly. The emulator is still in beta phase, so you can expect a lag-free gaming experience. 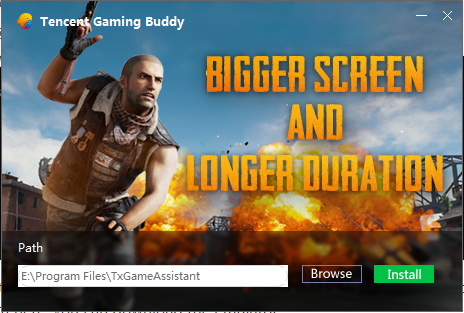 So, these are some few simple steps that you can easily do to play. But if you face any problem, you can go through the settings menu and try to lower ‘graphics and FPS’ settings to reduce lag. There are also many options that you do experiments to make best compatible. Blustacks is a most popular emulator for pc running any android app or game. The tool has now many bug improvement that it now almost support keyboard and mouse settings. This tool lets you mirror the android screen on the computer. Like Tencent mobile buddy, there’s no support of AOW engine that it custom made for it. It will only imitate the Android screen that exactly looks like in your PUBG mobile.

Steps to install Bluestacks on your PC Apower Mirror is another emulator or says a great tool with the purpose of mirroring your phone to the computer. Like Bluestacks you can have another emulator android that you easily install PUBG mobile. Also, you can take full control of your phone with your mouse and keyboard to take better utilisation. The Apower Mirror is available on Android, Mac, IOS and Windows that is fully compatible with these operating system. Some amazing features like you can record or take the snapshot while killing the best shot on PUBG. For talking with friends, you can use whiteboard function.

PUBG is an amazing android game and played by millions of people. PUBG can be easily played on PC by using these followed above tools and are great working for better experience. These emulator may are complex in setting up FPS and graphics but you can choose Tencent Gaming Buddy, as it is the official emulator especially made for playing PUBG mobile. Also, it has other more functions which can be simply controlled and setting up.

8 thoughts on “How to play PUBG mobile on PC”

Lenovo A5 Launched in India: Its full Specifications and its Price

OnePlus 6T launched in India: Its specifications, features and its Price